Polar cod (Boreogadus saida; Greenlandic: eqalugaq) is a key species in Arctic marine ecosystems. As the main prey of several fishes, seabirds, seals and marine mammals, polar cod plays a crucial role in Greenland cultural identity, food security, and socioeconomic systems. But climate change is threatening polar cod in some parts of Greenland. In the Uummannaq Fjord System and Disko Bay, surface water in the summer can now reach temperature high enough to cause mass mortality among polar cod eggs and larvae. This is one of the findings explained by Caroline Bouchard (Greenland Climate Research Centre, Greenland Institute of Natural Resources) and her colleagues in a study just published in the scientific journal Arctic Science.

In polar cod, the eggs and the larvae are the life stages the most sensitive to climate change. Above 3°C, most eggs fail to hatch. Above 5°C, the larvae hatch at a small size and are highly sensitive to starvation. The thermal tolerance increases afterwards, and juvenile polar cod can tolerate temperature up to 11°C. Since the mid-1990s, years with average July temperature above 5°C have become increasingly frequent in the Uummannaq Fjord System and Disko Bay. An imminent decline in polar cod recruitment can therefore be predicted for these areas, with cascading effects in the entire ecosystem in this area.

However at some locations, another effect of climate change could partly counterbalance the negative effects of ocean warming on the survival of polar cod eggs and larvae. For example, in Ukkusissat Fjord, large number or polar cod larvae were collected despite very high sea surface temperature (10°C). But the glacial meltwater at the surface of the fjord means the larvae, because of their specific density, were not at the surface, but at slightly deeper depths, where temperatures were much colder. As the Greenland ice sheet is melting at an unprecedented speed, this mechanism could somewhat decelerate the forecasted decline in polar cod recruitment in West Greenland fjord systems. 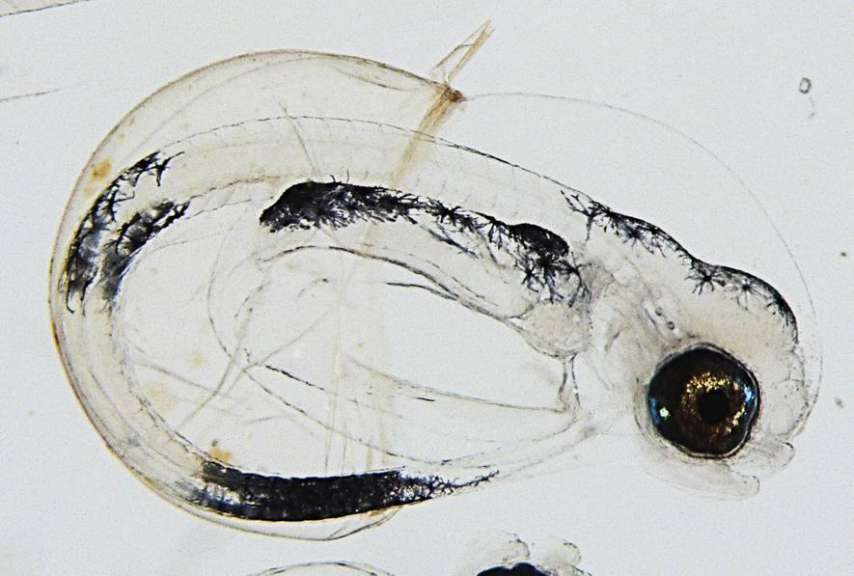 A polar cod hatching from its egg. ©sens2change